Article > Articles > Modern Garage Door Designs – Have You Chosen Yours? 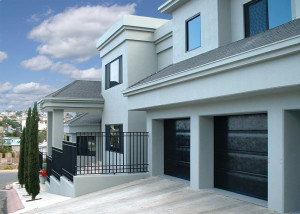 What makes garage doors modern? Is it the design, exclusively? The material, the color, the hardware? It’d be safer to say that it’s the sum of all the above. Of many things. And don’t forget that the term ‘modern’ refers to a certain period of time. Carriage style garage doors, for example, are reminiscent of the old-style carriage garage doors with the difference technology has brought to our lives. And so, today the materials are better and the movement is automatic and overhead.

So, we’ll dare blend the actual term of ‘modern’ with the ‘contemporary’. And not because they are used interchangeably but because mid-century garage door designs will still have some contemporary elements – like a smart opener.

Let’s take a look at the factors that can really influence the garage door style and modernize the home’s exterior.

Now, we won’t talk about glass garage doors since they are purely contemporary. But we can talk about composite garage doors for the simple fact that although it’s a rather contemporary material, it doesn’t show. Only you know it and get the advantages of a modern garage door that is also basically maintenance-free.

The color & appearance make all the difference

The overall style of residential garage doors is highly influenced by the color. The appearance too. Or, the texture, if you will. A classic example of a modern garage door is the recessed or raised panels.

Now, a fabricated wood garage door will be a traditional choice and won’t be modern. Watch the difference. It has to do with the appearance – if it has any interest at all, or if it represents an era. While such garage doors may take us back to the 1980s, they don’t reflect a particular style.

On the other hand, a wood overhead garage door with planks that give the impression of a checkerboard is considered modern due to its material, while it has some contemporary elements – that of the peculiar design.

Overhead garage doors with horizontal paneling are modern and become contemporary when they are painted black or gray. Or, when they have the same color with the rest of the building and so blend right in. A typical modern door will be brown – wooden, most of the times. Now the shade of brown or the type of wood used will define if this is a modern garage door that refers to a different era. Or if it’s modern in the sense of the contemporary.

These days, not all garage doors have windows. But if we want to talk about modern garage doors that reflect a specific era, our minds will go straight to the mid-century style. Back then – in the 1950s, the style was closer to minimalism with natural elements and horizontal windows. Horizontal elements too. Or with a set of smaller windows placed at the top of the door. That’s a classic representation of a modern style, while the contemporary designs allow for all sorts of configurations when it comes to the garage door windows. Or complete absence.

It was during the mid-century period when garage doors made their big boom. And that is why mid-century garage doors are considered modern. You need to keep the lines clean and add windows, in spite of the material you choose. But you can also come a bit closer to contemporary with an advanced garage door opener and technological marvels that will simply make your life easier. These too will be considered modern – in the literally sense, in a while.